“Nobody goes there anymore. It's too crowded.” - Yogi Berra, baseball legend

Another year, another set of New Year’s resolutions. Yet again, losing weight will be the most common resolution as it has been in years past. January is the “Black Friday” of the health club industry. The number of new gym memberships in January is 50 percent higher than in an average month. This phenomenon is known as “gympocalypse” to regular gym-goers, who fear the inevitably overcrowded gyms that a new year brings.

A quick look at Google Trends shows that more Americans search for a gym in January than any other month of the year. 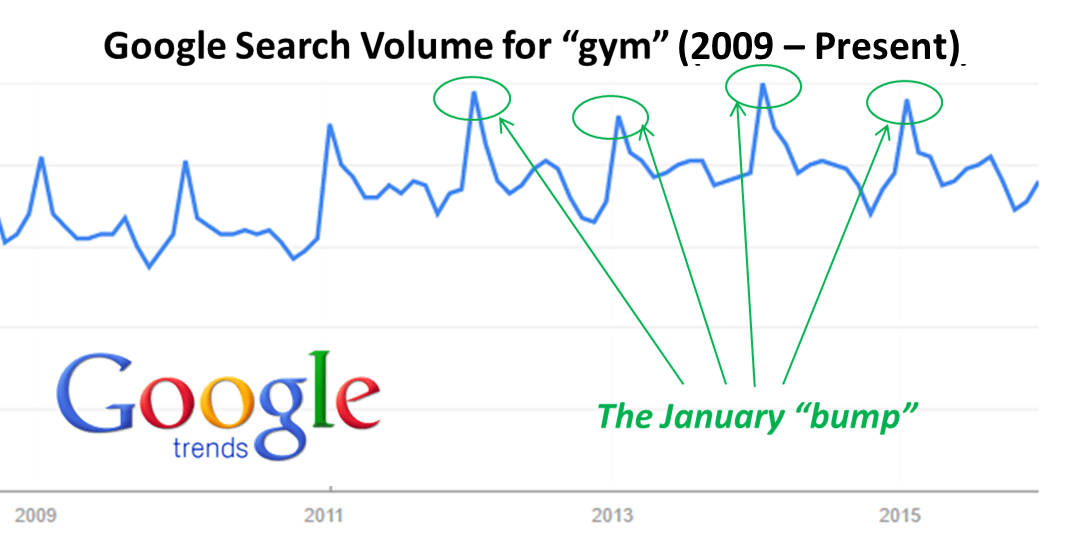 This January “bump” in our collective interest in getting fit is predictable and, I think, a good thing. Yes, the overwhelming majority – in fact, 92 percent of – New Year’s resolutions fail hard and fast. However, I believe, we should embrace those who are committed to starting the year off on the right foot by eating a bit healthier or moving a bit more. As I’ve written in past articles, the key to long-term fitness success is finding something that we love to do that fits our own lifestyles. The January gym rush gives many of us the opportunity to find that cool new spin class, inspiring personal trainer, or awesome new fitness product that makes working out work for us.

The good news is that despite the seasonal trends in our workout habits, the overall number of people going to the gym has been rising. According to the International Health, Racquet & Sportsclub Association (IHRSA), 73 million Americans used a health club between fall 2014 and winter 2015, the highest number ever recorded since the organization began tracking the metric in 1987. Gym memberships are going up as well. As much as I’ve written about fancy fitness tracking devices, streaming home workout videos, and the fickleness of consumers who dance from one boutique studio class to the next, the fact is that Americans are attending the gym in record numbers.

So, as you make your way to the gym to kick off 2016 and see some new and unfamiliar faces, I ask that you welcome them. Here’s to a healthy, supportive, and fit new year!

We’d love to hear from you. How do you feel about the January bump at your gym? Comment below or on our Facebook page or tweet us at @flytefitness.