"Ignorance is the curse of God; knowledge is the wing wherewith we fly to heaven." - William Shakespeare

The keys to fat loss are not a mystery: eat well and exercise. Doing one or both of these will lead to a caloric deficit that causes our bodies to break down fat through complex metabolic processes. As a result, we drop pounds from the scale and inches off our waistlines. This isn’t a secret. However, have you ever wondered exactly when and how fat exits the body? Have you ever thought about where the fat goes?

If you have pondered these questions, chances are that you believe it’s some combination of going to the bathroom, sweating, and conversion of energy to heat. While we lose excess fluid and food waste during these processes, we don't lose a meaningful amount of fat. If you’re puzzled right now, you’re not alone. In fact, you’re in very good company. A survey conducted by the University of New South Wales found that out of 150 doctors, dietitians, and personal trainers, only three people (all dietitians) correctly identified where fat goes. So, this information I’m about to share with you is far from common knowledge.

Results from survey asking “When somebody loses weight, where does it go?” 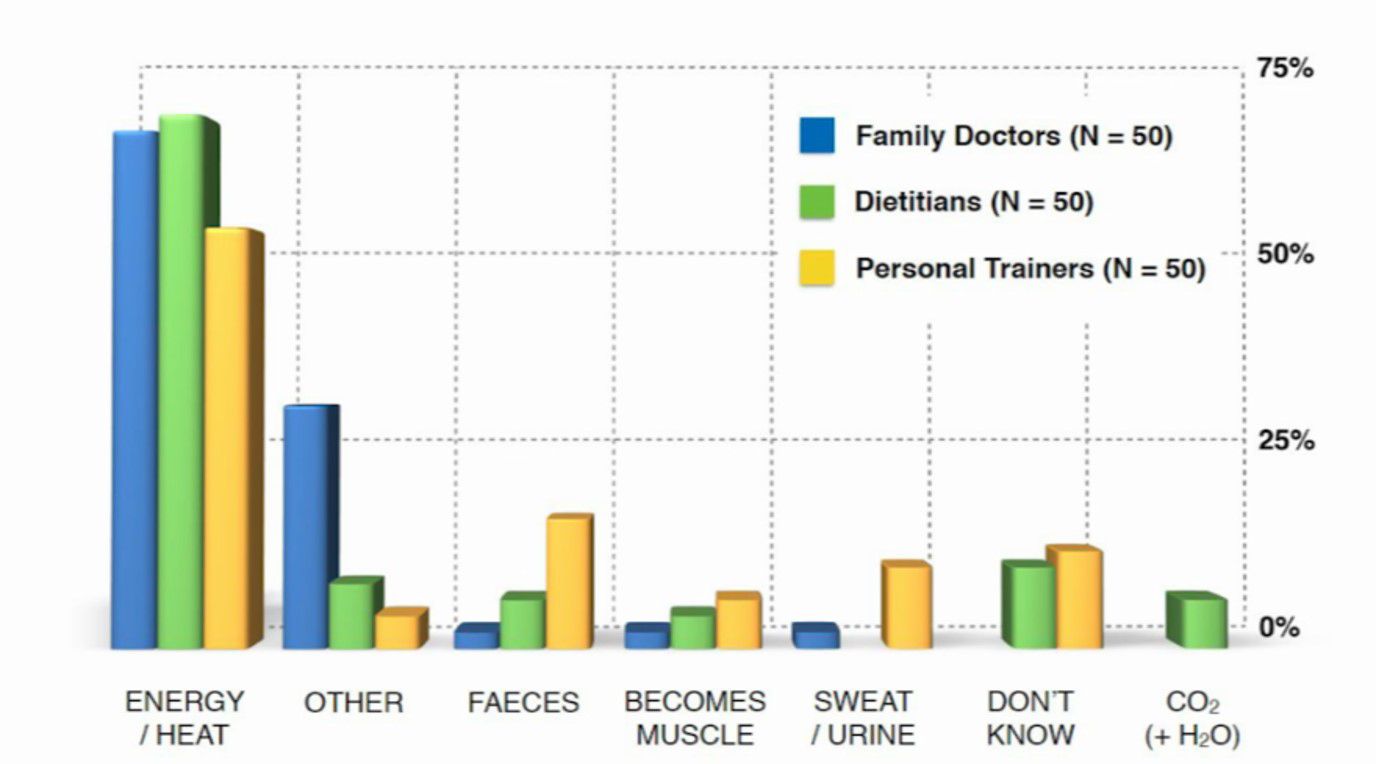 The actual way fat is lost is through our breath. Yes, I said it: you lose fat from breathing. Lipid researchers from the University of New South Wales recently published these fascinating findings in the British Medical Journal and reached this startling conclusion.

Lead researchers, physicist Ruben Meerman and biologist Andrew Brown, derived a formula for what happens when a molecule of triglyceride, the main fat in the human body, is burned. After the triglyceride metabolizes, carbon dioxide, water, and energy remain. The team found that oxidizing one pound of fat requires inhaling three pounds of oxygen, which then produces three pounds of carbon dioxide and one pound of water. For every pound of fat that leaves our bodies, 84 percent is lost through the carbon dioxide that we breathe out. The remaining 14 percent is accounted for through sweat, urine, and tears. NPR’s Nancy Shune writes, “We exhale lost fat. Exhale more CO2, and you'll lose more weight — especially if you're exhaling more frequently because you're running.”

Now you know the real way fat exits the body and now the misconceptions can be put to rest. While the idea that aerobic activity leads to fat loss isn’t a new one, the correlation between excreting carbon dioxide and losing fat proves that the lungs are the primary organ for weight loss. So, breathe away my friends and wave goodbye to those troubling triglycerides!

When You Burn Fat, Where Does it Go?

We’d love to hear from you. How did you think fat exits the body? Comment below or on our Facebook page or tweet us at @flytefitness.