Ever since witnessing the immense spectacle that is The Boston Marathon while attending college just outside Boston at Brandeis University, I had had visions of running through the finish line on Boylston Street to a thunderous ovation of amped-up Bostonians.

In late 2010, inspired by my college buddy Scott, I had just completed my first half marathon. I decided to embark on the long training journey required to prepare for my first full marathon. It wasn’t just any marathon that I chose as my first, it was Boston. I believed it would be my first and last, and I wanted it to be Boston.

I managed to circumvent the challenge of qualifying for the event by volunteering to raise money for The Boston Museum of Science. I had my spot reserved, some long runs under my belt, and a game plan for finishing the race in a reasonable time.

Then, during a long run on a trail, I felt a pop in my back. I began to feel an awkward pain in my lower back, but decided to finish my run anyway. Poor decision on my part. The pain increased over the next few days and I had significant discomfort walking at a regular pace. I couldn’t run, I could barely walk. I was months away from my first marathon and I was upset that I would likely miss out.

An MRI indicated two herniated discs. I began working with a rehabilitation physician and seeing a physical therapist three times each week. The rehab didn’t help and I continued to have pain while walking. My doctor gave me a series of epidural cortisone injections, which I found incredibly uncomfortable and also ineffective.

Having no success with traditional Western medical treatments, my doctor suggested acupuncture. I was shocked that he would suggest such a thing. I was an acupuncture virgin and had never considered it. The thought of having needles piercing the skin all over my body made me cringe. “I do it all the time. Just try it,” said my doctor. “What do you have to lose?”

Discovering Acupuncture
Desperate for any way to cure my injured back, I found a well-reviewed acupuncturist, Joe Alban of Alban Acupuncture and Herbs Clinic, online. After one session with Joe sticking me with needles, I felt better. “Placebo,” I told myself. Then, I went again the following week. And again the next. I was improving noticeably. Within a month, I was running with no pain. I became a believer. I managed to squeeze in my training runs with an adjusted plan and I completed The Boston Marathon on Monday, April 18, 2011. It was an awesome experience, and one that I would never have had if it wasn’t for my acupuncture treatment. 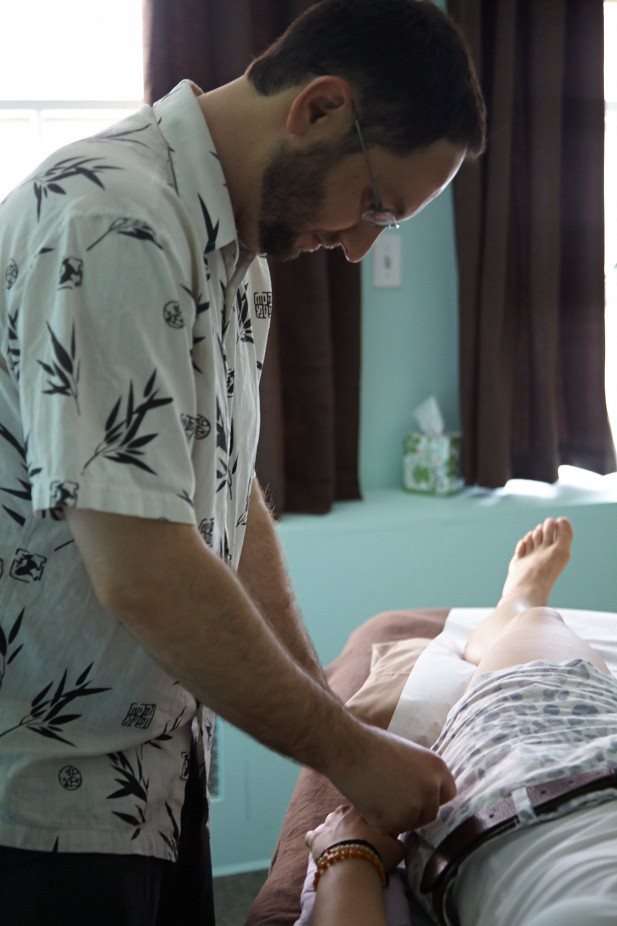 I still see Joe for treatments when I have pain… he’s relieved tight calves, sore knees, and my stubborn back. Recently, Joe shared his perspective on acupuncture with me.

Joe injured his back in a pick-up basketball game in college. He began acupuncture treatment, started tai chi, and his back healed. Joe was hooked. He earned his Masters of Science in Acupuncture and Oriental Medicine, followed by clinical training in a hospital in Hunan, China.

Joe defines acupuncture as “a natural method of healing the body in which you stimulate the body to heal itself.” He said, “Acupuncture looks at health as a balance. By correcting imbalances, acupuncture resets the body, bringing it back to a healthy state.” Acupuncture is not just about poking people with needles. Other manual therapies include acupressure (a form of hand massage) and cupping (creating suction with a cup). 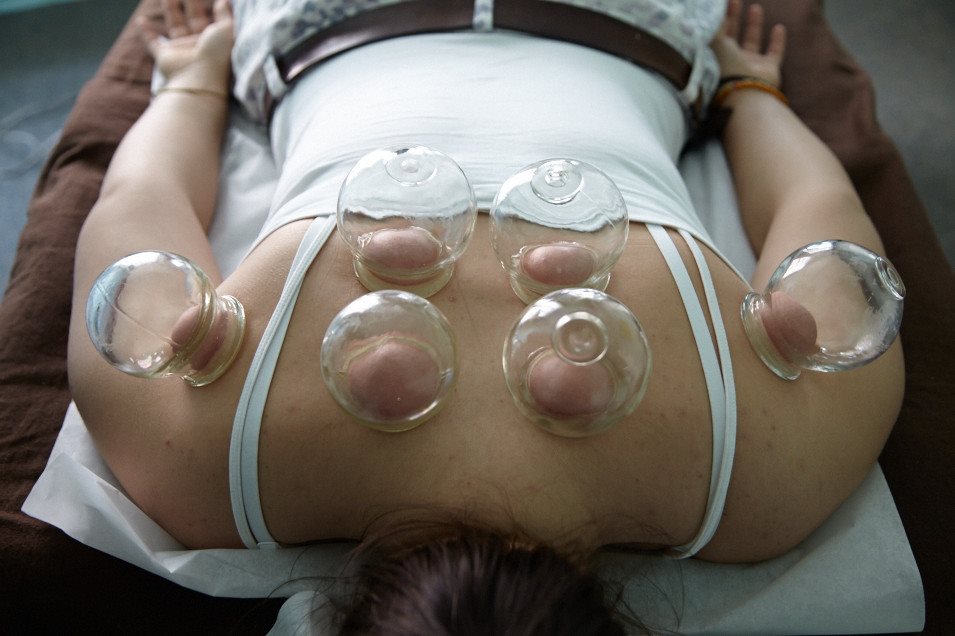 A patient receiving a cupping treatment

Joe frequently undergoes acupuncture treatment by his colleagues. And when no one is around to treat him, Joe has performed acupuncture on himself. He’s even managed to insert needles into his own back.

How The Hell Does It Work?
It’s been hard for me to understand why acupuncture works. To me, it’s like why a plane flies: I don’t get it, but it just does. Except acupuncture isn’t based on what most in the Western World would think of as “science.” Joe explained that Chinese medicine teaches that there’s an energy in the body, called “qi,” which circulates through meridians. “On these meridians,” Joe said, “are specific acupuncture points that have healing functions. Acupuncture therapy addresses qi imbalance due to chronic pain or injury.”

Huh? So, these knuckleheads are sticking needles all over my body to get some mysterious energy to flow better? I don’t buy it. So, I asked Joe for Western alternatives to why acupuncture works. Joe responded, “Acupuncture points are areas that are extra-sensitive to change within the body’s fascia, the connective tissue. Acupuncture also releases pain-relieving neuro-transmitters. It helps improve blood circulation, which brings blood to help heal target areas.” That feels “sciency” enough to me. And it actually resonates… particularly the circulation hypothesis.

Acupuncture and the Core
Of course, we couldn’t have a discussion without talking about the importance of the core. Joe stressed its critical role in how we function: “Every activity of daily life – lifting up your suitcases, going shopping, and picking up your kids – involves stabilizing the body by using the core. If you have an imbalance or weakness in the core, that can cause problems.”

Acupuncture, he said, can address these imbalances and weaknesses. At the same time, he contended, it’s important to stay active through stretching and exercise. Joe said, “When there is weakness, other muscles will tighten up and will cause an overcompensation which can lead to an injury.” So, if your back is in pain, or your knees are sore, you might have an imbalance. Strengthening your core will help alleviate that disharmony.

Debunking Acupuncture Myths
Just as I was afraid of acupuncture prior to my first experience and doubted its power, I’m sure many of you question it. I asked Joe to debunk some common myths about the therapy.

Considering that someone is inserting a dozen or more needles into your body, it seems that acupuncture could be dangerous. Joe said that “acupuncture is a very low-risk therapy. It’s much safer than most treatments out there and has no long-term side effects.” Several studies corroborate Joe’s statements regarding safety.

You might also think that the process of having needles inserted into your skin, letting them remain there for 20 to 30 minutes, and having them removed would be a painful experience. However, Joe said that most of his patients consider their treatment “very relaxing.” I can corroborate this as I have often fallen asleep during many sessions.

There is a common notion that the medical community as a whole doesn’t believe in acupuncture’s efficacy. Not so. Besides the fact that I found acupuncture through my medical doctor, Joe said that acupuncture is growing in acceptance within the scientific community as alternatives to steroids to treat pain are sought.

And of course, there’s the stereotype that everyone who practices acupuncture is Chinese. Acupuncture’s origin is Chinese, but its practitioners are not all Chinese or Asian. This fact actually surprises many people. Joe is exhibit A: a white Jew from New York.

We'd love to hear from you. How have your experiences with acupuncture been helpful and enlightening for you? Comment below or on our Facebook page at facebook.com/flytefitness, or tweet us at @flytefitness.